Spencer Gilpin is a former resident of Brantford, New Hampshire who now works in New York City. When he was a student in Brantford High School, he was known as the nerd who loves to play video games.

Spencer was afraid of just about everything, as he was shown in the beginning to be shy, awkward, and a bit cowardly. He also had allergies which he needed Claritin for and puts hand sanitizer everywhere on his body. He also gets surprised whenever he sees an animal nearby. But, when he turned in to Dr. Bravestone, he was the opposite.

During the film, despite his shyness and cowardice, he was often the one to take charge (mostly because he was the most experienced in video gaming). He understood how the video game worked, was the one to explain that the levels would get harder as they progressed and deduced that if any of them lost all three lives, then they would be killed off for real (which was proven when Alex Vreeke was stung by a Mosquito, costing him his last life and nearly died).

Spencer and Fridge were friends back in Middle School, but for an unspecified time, Fridge, in Spencer's words, 'thinks he's not cool enough to hang out with him, so he pretended not to even know him anymore'. At the beginning of the film, despite Spencer's attempts at friendship and doing his homework for him, Fridge would often brush him off.

During their argument, Fridge blamed Spencer for him getting kicked off the football team and admitted that he saw him as nothing more than an 'annoying kid he's been trying to shake since 7th grade'. In the game, being inside the form of Dr. Bravestone might have influenced Spencer to stand up for himself when redirecting Fridge blaming him for their misfortune, when Spencer only tried to make friends with Fridge and realising he was unfairly rejected for not being "cool enough" to hang out with him.

Over the course of the film, their friendship slowly starts to resurface; this is most exemplified when Fridge gives Spencer a pep talk after he admits he was too scared to continue the final level since he was on his last life. After leaving the game, Fridge and Spencer have become friends again.

At the gym, Spencer notices that Martha is having an argument with the gym teacher Coach Webb and admires her for it. He even admits to his admiration for her when they went to detention. At certain points in the film, Spencer & Martha expresses their feelings toward each other and at the end, they kiss each other. This indicates that they are now a couple.

In the 2017 film, Spencer tried his best to make himself closer friends with Fridge, thinking that by doing his homework for him, that Fridge would like to hang out with him. Spencer regretted this as he was soon found out and avoided suspension but got detention for helping his former friend Fridge with his homework by writing the essay for him as it was considered cheating. When the boys were placed in the basement for a clear out with Martha and Bethany, Fridge found a video game called "JUMANJI", so they stopped cleaning up and started to play the strange game. Spencer was in his element and started to like the game until it started acting so scary and pulling him inside in a horrible way. After landing in the level "From The Deep", Spencer had now become the avatar he chose, Dr. Smolder Bravestone, but still retained his insecure and paranoid side of his real self. In spite of the dangers facing the four, Spencer was the most proactive and intelligent, since he was the most familiar with video games and all types of common gaming tropes, anticipating the limited NPC nature of Nigel and how levels would start easier and get harder with game progression. Using Bravestone's higher gaming status, Spencer was able to fight back at "The Mighty Roar" when Professor Van Pelt's Army attacked, and was able to figure out that the tattoos represented the cautionary life system. On their way to find their missing piece at "The Bazaar", Spencer and Fridge had an untimely argument about their predicaments before and after getting into "JUMANJI", leading to Finbar (Fridge) shoving Bravestone (Spencer) off the edge of a cliff, costing him one life. Fridge warned Spencer not to let himself get too overconfident with having Bravestone's form, as it didn't change who he really was on the inside, but Spencer managed to regain his cool and remind them not to waste lives so recklessly. At "The Bazaar", Bravestone (Spencer) and Finbar (Fridge), managed to overcome their falling out by cooperating to restrain and de-fang the lethal Black Mamba, and working together to fight back with Professor Van Pelt and his men attacked the avatar crew. Thanks to playing fighting games, Spencer used Bravestone's gaming pro stats to beat back the foot soldiers until Professor Van Pelt ended the fighting, cut short when the fifth avatar Seaplane McDonough joined their crew and led them out of "The Bazaar" to the Parrish Treehouse. After his adventures in the video game, he is more confident, revives his friendship with Fridge, and started dating Martha Kaply.

In the 2019 film, despite growing closer to his three friends after their time in "JUMANJI", Spencer had moved to a drugstore job in New York City and was relentlessly pestered by bad luck, causing him to grow more distant from his friends and putting his relationship with Martha on hold. Although Martha planned to meet up in Brantford with everyone else, Spencer ended up visiting his mother and grandfather at home, feeling unhappy with his life and longing for the thrills he had as Bravestone. One night, unbeknownst to Fridge, Martha and Bethany, Spencer retrieved the pieces of the "JUMANJI" video game after they seemingly destroyed it, and attempted to repair it, assuming that he would get to play the Jaguar Shrine Adventure and would automatically return to the form of Smolder Bravestone again. Spencer was harshly proven wrong when he was now in the Mountain Fortress Adventure, an entirely different story as another avatar; Ming Fleetfoot, instead of Smolder Bravestone. 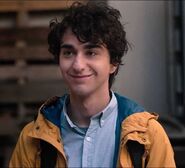 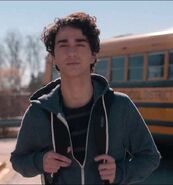 Retrieved from "https://jumanji.fandom.com/wiki/Spencer_Gilpin?oldid=11860"
Community content is available under CC-BY-SA unless otherwise noted.