Professor Sheldon "Shelly" Oberon is one of the five selectable playable character in the Video Game version of "JUMANJI", that appears in "Welcome to the Jungle", as the chosen avatar of Bethany Walker, and in "The Next Level" as the avatar forcibly given to Anthony "Fridge" Johnson.

Shelly Oberon's background before coming to "JUMANJI" with his three companions is unknown, but he is described as a genius and code-breaker, and has qualifications in archeology and paleontology. He is also an expert in geometry, which is very useful for finding the proper way across hazardous and unreliable walkways.

His symbol on the player select screen is a square academic cap, referencing his title as a professor of many things.

When Bethany chose Shelly Oberon on the player select screen, she was soon pulled into the video game console and transported into the inner world of "JUMANJI", within the avatar she chose; Professor Shelly Oberon. The reason why Bethany chose Oberon was because his nickname was Shelly and was labeled the Curvy Genius; obvious misleads in believing Dr. Oberon was a female avatar. Shelly was the first character to lose a life in the film, after getting devoured by an angry Hippopotamus, introducing the players to the concept of having lives to worry about.

For a while, Bethany didn't enjoy being stuck as Sheldon Oberon and even became envious of Martha choosing the bombshell Ruby Roundhouse, but her experiences as Oberon opened Beth's eyes to start considering other peoples problems and not her own. Shelly (Beth) even gave Ruby (Martha) some pro advice on using her newfound looks to distract Van Pelt's soldiers. Taking on the character of Shelly Oberon also influenced Bethany to help her fellow players get home safe, even losing a life intentionally when giving one of his lives to Seaplane McDonough (Alex) to save his life from being lost permanently.

Martha Kaply and Bethany Walker convince Fridge to return to inside the game "JUMANJI" to save Spencer Gilpin. Once inside: Martha is the only one who returned to her original avatar as Ruby Roundhouse, while Spencer's grandfather Eddie Gilpin was the one now inside the body of Dr. Smolder Bravestone and Milo was inside the avatar of Franklin "Mouse" Finbar, leaving Fridge stuck inside of Shelly Oberon, much to his very clear and obvious disappointment. Roundhouse (Martha) and Oberon (Fridge) speed time try to tirelessly explain the game to the two older men, who cannot fully grasp the concept yet. While explaining the dangers of the game, they avoid an identical Hippo attack like the last time, but Shelly (Fridge) was unexpectedly eaten by an enormous Python, causing Oberon (Fridge) to be subsequently reborn before their eyes and the entire group was soon picked up by their guide Nigel Billingsley.

On their way to "The Dunes", Nigel was able to explain the game's new story through a series of flashbacks, much to the continued confusion of the old men, but then Nigel abandoned them to their fates and dropped the quartet off in the desert and on a completely different level of the game. Soon, Bravestone (Eddie) soon angers an Ostrich, who soon returns with his herd, forcing the four to flee for their lives. While trying to flee, Oberon (Fridge) climbs into a Dune Buggy with Roundhouse (Martha), but they soon become overturned and climb into the same Buggy as Bravestone (Eddie) and Finbar (Milo). Bravestone (Eddie) confidently tries to drive them over a ravine, to the other side of the cliff, but his plan barely succeeds, as the Buggy falls into the ravine, leaving the four soon to make their way to the next level on foot. Shelly (Fridge) was continually annoyed and even more unhappy than he was as Mouse Finbar when he found out Shelley has even more weaknesses now, including heat sun and sand, made even worse by starting in a desert level.

After entering the Oasis town, they follow their clues Nigel gave them, following Bravestone's "old flame" to a bar, where they observe to their new nemesis, Jurgen the Brutal, who is holding at new in-game precious stone objective, the Falcon Jewel. Unfortunately, Bravestone (Eddie) stops the cat burglar before she can make off with the Falcon Jewel, and when she is killed by Jurgen and re-spawns outside, they realized that Ming Fleetfoot is actually Spencer's new avatar. While on a side mission to find the Jumanji Berry Tree, Roundhouse (Martha) fell into the surrounding green water, and when Oberon (Fridge) tried to help her out, Martha and Fridge briefly switch bodies, much to Fridge's enjoyment when experiencing Roundhouse's super physics. But they soon switch back after Roundhouse (Fridge) starts showing off and falls back into the water, and when they hold hands, Fridge was again left as Oberon. After being ran out of town, the group started arguing because of Eddie's arrogance getting them into trouble, and allows the gangster Switchblade to land a shot from a rocket launcher and take them all out, taking away a spare life.

After making it to the forest on Camels, the group soon arrive at the next level; a chasm of constantly moving bridges, made even worse by an oncoming assault of Mandrills. Because of Oberon's geometry skill, Fridge realised he wasn't so useless after all, and he was able to pinpoint the exact bridge they needed to run to and find the correct path to the safe side. In the process, Oberon (Fridge) twists his ankle. Once on the other side, the four were cornered by the Mandrills until Alex as Seaplane McDonough and Bethany as Cyclone came to their rescue and even had time to shop for more appropriate clothing for the winter levels.

Now approaching the Mountain Fortress, Oberon (Fridge) was irritated that his poor foot was a setback for him, while pointing out the problems that Eddie was always getting them into trouble and Milo explaining everything too much and too slow, but when he sat down to rest, he falls down a hill towards a flowing river. Oberon (Fridge) and Roundhouse (Martha) then recognize the same magical water from the Berry Tree, and everyone is soon able to switch avatars, allowing Fridge to return to being Finabr, and Bethany go to be Oberon again. When Eddie and Milo are captured by Jurgen's men, Oberon (Bethany) finds out where they are on the new Map of "JUMANJI", and the five split up to rescue them. On the way inside the Fortress, Oberon (Bethany) and Finbar (Fridge) are confused for two other in-game characters that are supposed to be crime syndicate brothers, and during their con to stall for time they are soon found out, not long after Roundhouse (Martha) and Bravestone (Spencer) appears and a huge fight breaks out. Oberon (Bethany) and Finbar (Fridge) try to hold off their attackers with a flaming torch while Roundhouse (Martha) wins more easily using her fighting dance skills. Through a series of unexpected events including Cyclone the horse having wings, they are eventually able to rescue the missing jewel and save all of "JUMANJI".

Shelly Oberon at the Bazaar with his friends.

Protagonists.
Add a photo to this gallery 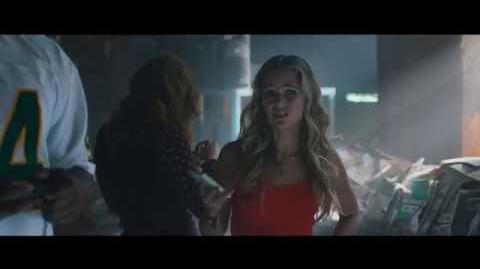 Retrieved from "https://jumanji.fandom.com/wiki/Shelly_Oberon/Film?oldid=11781"
Community content is available under CC-BY-SA unless otherwise noted.