Student (as kid)
Psychic (as adult in altered timeline)

“I was a little girl Alan...You disappeared...And a bunch of Bats surrounded me and chased me down the street...I was afraid...I'm sorry, Alan...No-one believed me, I was all alone.
So was I. For twenty six years, Sarah.
Me too.”
—Sarah Whittle and Alan Parrish

Sarah Whittle is the deuteragonist of the 1995 fantasy film, Jumanji and its novel adaptation. She is portrayed by Bonnie Hunt as an adult and Laura Bell Bundy as her younger self. 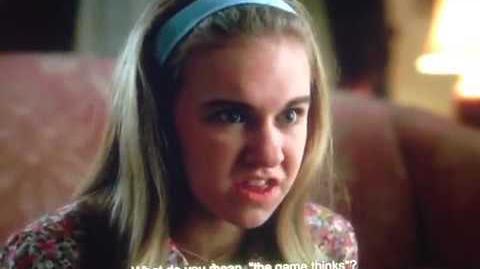 Jumanji (1995) Young Alan, Young Sarah And The Bats.
Add a photo to this gallery
Retrieved from "https://jumanji.fandom.com/wiki/Sarah_Whittle?oldid=11079"
Community content is available under CC-BY-SA unless otherwise noted.