"Old Man" Vreeke is the neglected father of Alex Vreeke.

In 1996, in Brantford, New Hampshire, Mr. Vreeke was out jogging on the beach, when he heard the sound of drumbeats and turned around to find the Jumanji board game buried in the sand (after it found its way back to Brantford from being thrown over a bridge by Alan Parrish and Sarah Whittle in 1969 and two French girls in 1995). When Mr. Vreeke took Jumanji home, he gave the game to his son Alex who was uninterested in board games and preferred video games. The game capitalized on Alex's preference in the modern era and magically transformed its game board into a video game cartridge which caught Alex's attention and was teleported into the game when playing it. The uncertainty of Alex's fate led to his father losing his faith and the house being slowly dilapidated and in disrepair for years, gaining him an unfairly exaggerated reputation.

Thanks to the game being won and allowing the players to revert to their former selves and return to the real world, Alex did not return with them to their timeline but rather to his own, undoing the years of disaster on the Vreeke family.

The changed history returned the Vreeke household back to its former glory, and Mr. Vreeke was able to continue his life with his now adult son and two young grandchildren. 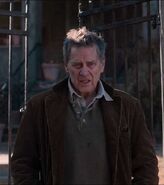 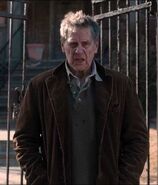 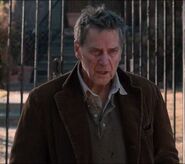 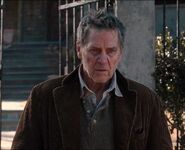 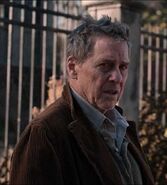 Add a photo to this gallery
Retrieved from "https://jumanji.fandom.com/wiki/Old_Man_Vreeke?oldid=11972"
Community content is available under CC-BY-SA unless otherwise noted.