Films:
"Welcome to the Jungle"
"The Next Level"
Games:
"Video Game"

After Alan Parrish and Sarah Whittle set the "JUMANJI" board game adrift in a river, it was then found by a pair of French girls. The board game (somehow) made it's way back to Brantford, New Hampshire in 1996 where it was found on a beach again, this time by Mr. Vreeke, who then took it home to the Vreeke House, thinking his son Alex Vreeke would like it. However, Alex did not like the board game, as he said "Who plays board games anymore?". "JUMANJI", seeing that Alex was more interested in video games, knew it had to adapt to modern times and tastes in order to attract interest and in the middle of the night, changed its game board into a video game cartridge, leaving the empty box behind. Alex then took immediate interest and started to play the game, playing as Jefferson "Seaplane" McDonough. However, Alex became McDonough and became trapped within "JUMANJI" and suffered the same fate as Alan Parrish; the boy who disappeared from Brantford.

Twenty years later, the "JUMANJI" video game console was donated to Brantford High School, then found by four students in the school basement (they were there to help recycle old magazines as a way to serve detention). The four students, Spencer Gilpin, Anthony Johnson, Bethany Walker, and Martha Kaply then started to play the game, were taken into "JUMANJI", and literally became the avatars they chose:

Inside the world of "JUMANJI", the group met the game's field guide Nigel Billingsley, instructing them to return the Jaguar's Eye to the Jaguar Shrine and lift the curse, and would be able to leave the game after they save "JUMANJI" and call out its name. Eventually the four found their "missing piece": who was Alex in the form of Seaplane McDonough, who believed himself to be gone from home for only a few months, when it was really 20 years. Together they won the game and were returned to the real world by Nigel Billingsley. Though the rest of the players returned to 2017, Alex was sent back in time to 1996 to the moment he left, altering his family's sad history.

Once they completed the game and returned to their real selves, they used a Rhino brand bowling ball to destroy the "JUMANJI" game to prevent anyone from playing it again.

Despite the four friends growing close after playing "JUMANJI", Martha and Spencer had drifted apart. Spencer's life had been much harder compared to the others. This leads to Spencer to attempt to repair the partially broken game cartridge and game system that he had recovered in the alleyway where they smashed it. Spencer does this to regain the thrills he once had as Bravestone. Although Spencer seemed to have fixed "Jumanji" and it pulls him back into the game, he does not end up as Bravestone, but instead as a new character named Ming Fleetfoot. Fridge, Martha and Bethany notice Spencer's disappearance. They then hear "Jumanji" drums, find the game partially repaired and realize that "Jumanji" took Spencer back, reluctantly urging them to play once more to bring him home. But before they could even choose their avatars, "Jumanji" pulled all of them back in anyway and forced them into randomised avatars: Martha retained Ruby Roundhouse, Fridge became Shelly Oberon instead of Mouse Finbar, while Eddie Gilpin became Smolder Bravestone instead of Spencer, and finally his friend Milo Walker had become Finbar. However, Bethany remained trapped outside the game world and sought the help of Alex to get "JUMANJI" working again. After getting the game going again, Alex returned as Seaplane to aid them, along with Bethany, who had become a horse named Cyclone. At the end of the adventure, the dying Milo chose to remain in the game world as Cyclone while the rest of the team were returned to Spencer's basement.

Following the adventure, "JUMANJI" remained in the basement of Spencer's house while the friends vowed to never play again. However, the console was found by a hot water heater repairman and Spencer's mother. The man activated it, presumably sucking in himself and Spencer's mother and unleashing a herd of ostriches upon Brantford.

The video game version of "JUMANJI" plays almost as it did when it was a board game, but added some extra features as the result of its transformation.

Plot of the Game

According to legend, anyone that dares to blind the Jaguar Shrine by taking the jewel that makes up its eye will be consumed by the gem's power and a curse will fall upon the realm. Professor Van Pelt hired field guide Nigel Billingsly to lead him and his men to the Jaguar, to study the jewel for his documentation. He inevitably made this legend come true when he gained the power of the fabled "Jaguar's Eye" which gave him mind control over all fauna within "JUMANJI" . Nigel Billingsley knew that Van Pelt would cause harm if he was allowed to keep the Eye, so he took the eye from him and ran, but was spotted before he could successfully escape. He sent a letter to Dr. Smolder Bravestone, a former friend and colleague of Van Pelt's to ask for his assistance returning the eye to its resting place. It became Bravestone and his colleagues' mission to head to "JUMANJI" to return the Eye to the Shrine which it was taken from.

The Jumanjian conquerer Jurgan The Brutal has returned to "JUMANJI" and brought his savage horde with him. Jurgan and his horde decend from their mountain fortress and make their way to the Avian Province, home of the sacred Falcon Jewel, a mystical item worn around the neck of the village elder and has been guarded by the people of the province for hundreds of years. The Falcon Jewel is a fertility jewel, and as long as the jewel can see the sun, the waters will flow and the land will flourish. Jurgan stole the jewel, and stowed it in darkness, hidden from the sun. With the jewel locked away, a drought fell upon the land. To save "JUMANJI" once again, Nigel Billingsley sends forth a letter to Dr. Smolder Bravestone and his associates, requesting for their return and assistance in recovering the Falcon Jewel and showing it to the sun. Nigel warns Dr. Bravestone that this adventure will be like no other, since it was Jurgan who killed Bravestone's parents when he was just a boy.

"JUMANJI" has multiple video game cliches and tropes within its world, such as friendly NPCs that only have programmed responses, multiple lives, markets, a villain who leads a private militia, magic satchels, character weaknesses, and several others. 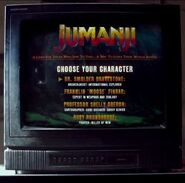 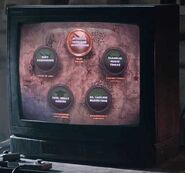 Protagonists
Add a photo to this gallery
Retrieved from "https://jumanji.fandom.com/wiki/Jumanji_(Video_game)?oldid=13069"
Community content is available under CC-BY-SA unless otherwise noted.