The Jaguar Shrine is a mountain colossus in the shape of a Jaguar sighted in the heart of the dimension in the video game version of Jumanji, serving as an important location and resting place of the game's focal point, the Jaguar's Eye. It serves as the location for the game's final level; The Defenders.

The Shrine is a tall colossus in the shape of a Jaguars head since Jaguars are the video game version of Jumanji's main big cats instead of Lions. According to legend, the Jaguar watches over the realm of Jumanji and anyone that dares to blind the Jaguar colossus by stealing its eye will be consumed by the jewel's power and a curse will engulf the realm.

Archaeologist Professor Van Pelt was obsessed with finding the Jaguar's Eye and hired Nigel Billingsley to help him find it with a large squadron of men, claiming he wished to document the jewel in his writings. However, he was instead there to claim the jewel for himself, causing a curse to befall Jumanji and possessing him with dark power, granting him mentally manipulated control over the jungle creatures.

Nigel begged Van Pelt to put the jewel back, but he refused, so while the camp slept that night, Nigel stole the jewel and ran, sending a letter to Dr. Smolder Bravestone to come and help him return the jewel and lift the curse. Once the four high school teens entered Jumanji after choosing their avatars, they encountered Nigel who guided them their game objective to find the Jaguar's Eye and return it to the Shrine in order to let them escape the game and return home.

When the five avatars arrived at the level starting point, the appearance of the Jaguar's Eye made previously unlighted torches ignite, creating guided pathways towards the Jaguar colossus. When they noticed the Elephant statue resembling the idol they found at The Bazaar, Smolder Bravestone (Spencer) decided to do as the clue instructed and climb, but he was startled by a screeching Squirrel and lost his nerves, falling to the ground and inevitably mauled by a Jaguar. However, even more Jaguars began to appear as Bravestone (Spencer) respawned, to defend their territory against the trespassers. To avoid the cats and Van Pelt's henchmen, Mouse Finbar (Fridge) came up with a cunning plan to reach the shine while avoiding capture or death, by each avatar splitting up to draw each hostile attacker into an encircled fire trap, basing it on football tactics.

Thanks to his Vulture, Van Pelt learned about the player's arrival at Jumanji's final level and decided to wait for the adventurers at the Jaguar Statue himself, after he lost them at The Bazaar. Using his ability to control the Jaguars, he captures Shelly Oberon (Bethany) and tried to use him as leverage against Bravestone (Spencer) to get the eye, however, he is thwarted when Mouse Finbar (Fridge) arrives riding an Elephant, with the eye in his hand, which takes out Pelt's jaguars, but he fires a pistol shot which scares the Elephant off.

The players realised that the appearance of the Elephant was symbolic of their clue to start climbing the shrine, giving Ruby Roundhouse (Martha) and Smolder Bravestone (Spencer) a plan. Because the Eye was launched into a snakepit where Ruby Roundhouse (Martha) retrieved it, Van Pelt attempted to use the snakes to threaten her, however, this had been her plan all along, using her natural weakness to venom, Roundhouse (Martha) is killed and instantly respawns, therefore falling from the air, allowing her to throw the Eye to Bravestone (Spencer), who sets it back into the altar. The group all call out Jumanji's name, winning them the game and a trip back home, breaking the curse, and causing Van Pelt to disintegrate into a horde of rats.

Upon completing the game. Nigel arrived at the shrine to shake each of the five player's hands to send them home to Brantford High School. 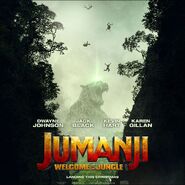 Bravestone (Spencer) lands on the colossus.

A Jaguar prepares to chase trespassers.

Moose rides an Elephant.
Add a photo to this gallery
Retrieved from "https://jumanji.fandom.com/wiki/Jaguar_Shrine?oldid=11676"
Community content is available under CC-BY-SA unless otherwise noted.