General Angus Parrish was a civil war cavalry general and an important historical character in the early history of Brantford, New Hampshire. His descendants included a large extended family from Sam Parrish, Skylar Parrish, Alan Parrish to an unknown descendant.

Angus Parrish had a historical success within the Civil War as a three star General, which earned him the title was a war hero and also a large memorial statue of himself riding a horse being built in the town square. After the war ended, Angus used up his spoils of the war to build himself a Mansion that became a popular tourist stop spot due to being the largest, finest and oldest house on the highest point on Brantford. Angus spared no expense, adding carved oak doors, a grand entry foyer and vaulted living room, a fireplace large enough to roast a side of beef, an antique grandfather clock the size of a small tree, enough bedrooms for a large family and servants, and a tremendous attic. In honor of the Parrish ancestry, a bust of General Parrish with an imposing stern glare was kept on display in the extensive library. A long cutlass belonging to General Parrish was encased in a glass display on the fireplace in his honor.

On the day he discovered the board game called "Jumanji", Alan Parrish was cycling past his great-great-great grandfather General Angus' statue on his way home, and gave his usual respectful nod to him, until Billy Jessup and his gang ambushed him from behind to beat him up. After Alan disappeared from home when he was taken into the "Jumanji" dimension, the boy's disappearance devastated his parents and Sam abandoned his Shoe company which broke Brantford's economy and lead to anti-social behavior defacing the statue of General Angus.

Even though the Mansion went empty for many years, General Angus' ornaments were kept behind, but Alan had to smash the glass to obtain the sword to save Peter Shepherd from the vine of a Pod, apologizing to Angus' portrait above. Alan later used Angus' cutlass against Van Pelt, but the hunter was merely slowed down by it, who casted it aside. 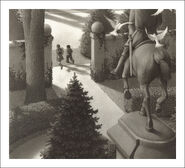 The man & horse statue in the picture book.
Add a photo to this gallery

Retrieved from "https://jumanji.fandom.com/wiki/General_Angus_Parrish?oldid=10667"
Community content is available under CC-BY-SA unless otherwise noted.