The Bazaar is a market town within the realm of Jumanji that serves as the third level in the video game version. It is also represented on the film's closing credits.

Many different stalls are operated by various NPCs that sell, food, special goods, many maps and various stalls that sell weaponry. Notes from the Jumanji central bank are accepted as payment for goods. There are a series of secret underground tunnels that can lead travellers outside the Bazaar to reach Alan Parrish's treehouse, the transportation shed and ultimately the Jaguar Shrine. However, there are a multitude of booby traps and a flooded pit full of Crocodiles which make passage through them very dangerous.

The Bazaar is also represented on the Map of Jumanji which Cartographers like Shelly Oberon can view.

Thanks to Shelly Oberon (Bethany) reading the map of Jumanji, the four players came to the Bazaar to find their next clue to finding the Jaguar Shrine. Although the intention was to not attract attention to themselves, they began interacting with a residential baker when he tempted them with his wares in conjunction with Shelly (Bethany) feeling hungry, indicating they needed to replenish their health. If that wasn't enough, after eating the merchant's pound cake sample, (albeit he was unaware what it really was) it caused Franklin "Mouse" Finbar (Anthony Johnson) to lose a life by a sudden explosion. A small boy that spoke in rhyme showed them to a Snake basket where their next clue was hidden, but it was guarded by a Black Mamba, requiring them to defang the Snake to get the message hidden underneath it. The players were then confronted by several of Professor Van Pelt's men after Van Pelt's spy Vulture tracked the four players to the Bazaar and immediately left to inform it's master. After Dr. Smolder Bravestone (Spencer Gilpin) knocked out several of his men, Van Pelt himself arrived to take charge of the situation and confronted them. The players were then rescued by Jefferson "Seaplane" McDonough (Alex Vreeke), who took them into the tunnels below the Bazaar and led them to Parrish's treehouse.

When Van Pelt's Army failed to apprehend the five, Van Pelt summoned a Scorpion to execute his second-in-command for his failure.

The Bazaar on the Map of Jumanji.

The four players enters the Bazaar

Roasted Bats for sale at the Bazaar. 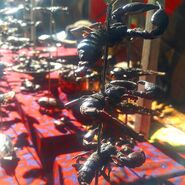 Rifles on sale at the Bazaar.
Add a photo to this gallery
Retrieved from "https://jumanji.fandom.com/wiki/Bazaar?oldid=11679"
Community content is available under CC-BY-SA unless otherwise noted.